Bhutan, a Buddhist kingdom on the Himalayas’ eastern edge, is known for its monasteries, fortresses (or dzongs), and dramatic landscapes that range from subtropical plains to steep mountains and valleys. In the High Himalayas, peaks such as 7,326m Jomolhari are popular trekking destinations. Paro Taktsang monastery (also known as Tiger’s Nest) clings to cliffs above the forested Paro Valley.

A country resting peacefully in the lap of eastern Himalayas is one of those very few places that can probably take you back in time. The unadulterated nature, around 73% of the land drenched in wild greenery, the flag with dragon engraved on it, the rice that is born red, the place which is believed to be haunted by multiple demons and protected by multiple gods, the innocence of the locals that still believe that snowman exists and dragons spitfire, the land that has preserved the rarest of the nomadic tribes and fauna on the list of ‘red-alert’ is what Bhutan is made up of. Not very well known amongst the tourist crowd, Bhutan indeed offers some mystical, magical places to visit for the intrepid traveler 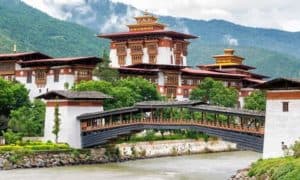